What happens between elections is just as important for democracy as elections themselves, explains political scientist Brian Klaas during our special group seminar, urging us to “make Europe the champion of democracy”.

Democracy is often reduced to just voting, and too often taken for granted. But the right to vote, free and fair elections, a free press, watchdog agencies, civil society,…- all essential pillars of a true democracy – do not come easy nor cheap.

Brian Klaas, political scientist at University College London, argues that today, democracies all over the world are under attack, and not just in faraway places but also in the United States or even closer here at home in Europe, with fundamentals such as the rule of law and press freedom among others being curtailed by autocrats in Poland, in Orban’s Hungary, or in the immediate neighbourhood in Turkey, Syria,… Autocrats and despots chip away at one critical pillar after another, undermining public trust in institutions and therefore threatening entire democratic societies.

That is why what happens between elections is just as important as the elections itself, said Klaas during our group seminar. He urged our local and regional representatives to strengthen democracies also at their level of government and this not just in cases where there are already established authoritarian leaders, but also as a bulwark against upcoming autocratic leaders or groups. With the absence of the United States as the world’s torchbearer for democracy under President Trump, it is up to us to make Europe the unapologetic champion of democracy. He also issued concrete action points to help us do so, with the local level in the front seat to set the example for the national level, since opinion polls consistently show that local elected representatives inspire high levels of trust amongst citizens.

How to shore up the democratic sandcastle from the authoritarian wave?

In response to today’s challenges for democracies, Klaas laid out this series of concrete actions to strengthen our democracies against upcoming or already established authoritarian leaders:

Democracy doesn’t mean just elections. It’s crucial that at all levels citizens, politicians, … who want to maintain democratic culture respect the rules. And more than ever now we need citizens to maintain this democratic culture and that includes rights and obligations. As politicians we need to promote the best political atmosphere possible, not just concentrate on getting a win in the elections and then forgetting about democracy until the next election.

On Monday 17 September the ALDE Group in the European Committee of the Regions invited political scientist Brian Klaas (UCL), author of “The Despot’s Apprentice: how the West is aiding the decline of democracy” and Washington Post columnist, to our group meeting. He presented a lecture, “The pillars of democracy under attack and how to protect them” and provided concrete suggestions on how to shore up democratic institutions at the local level, as well as explaining how local politics is being used to constrain Trump in the US and how that might offer lessons that are valuable for European democracies facing an onslaught of authoritarian populism, present or future.

“Make Europe the champion of democracy”, says @brianklaas in his presentation to our members about how the pillars of democracy are being attacked around the world, and how the local level can set the example to the national level. pic.twitter.com/tgExUFR2fu 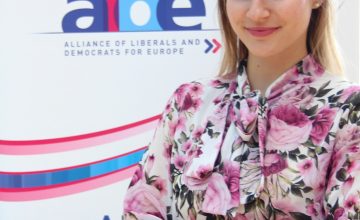