As part of the Union of Equality efforts, the European Commission published the first ever LGBTIQ Equality Strategy. The Strategy sets out a series of targeted actions around four main pillars, focused on: tackling discrimination; ensuring safety; building inclusive societies; and leading the call for LGBTIQ equality around the world.The role of the local and regional dimension is acknowledged in the proposal, and the European Committee of the Regions is expressly mentioned and called to promote dialogue with local and regional authorities and civil society, including social partners, on how to advance LGBTIQ equality. This report also reiterates Renew Europe CoR’s address against the attempts of certain Polish local and regional authorities to marginalise the LGBTIQ community.

Kate Feeney’s report was overwhelmingly approved with cross-party support during the European Committee of the Regions plenary. 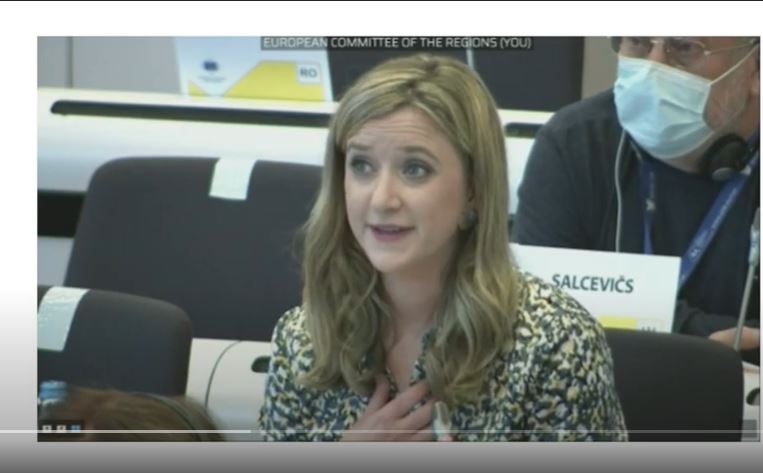 During the SEDEC-commission meeting of the European Committee of the Regions Kate Feeney intervened to raise awareness during the discussion of homelessness to advocate for a strengthening of the point / focus on homelessness among LGBTIQ-people.

While discussing the Gender Equality Actions, Kate Feeney raised her voice for gender equality tools “that allow women to obtain and develop skills and knowledge to not only receive a place in politics, but allows them to grow in it” during the European Committee of the Regions SEDEC Commission meeting. “The Covid-19 crisis was an eye opening experience, young parents were finally able not to choose between career and family life – this should also be part of our future!”

The SEDEC commission of the European Committee of the Regions debated the draft report of rapporteur Kate Feeney. During the debate there was the participation of Renew Europe MEP Pierre Karleskind.

Raising and discussing the issue of the rights of rainbow families in cross-border movement within the EU, councillor Kate Feeney focused on how local authorities can rise above and beyond of existing national laws:

Renew Europe CoR President, François Decoster, Mayor of Saint-Omer and member of the Regional Council of Hauts-de-France, argued: “The defense of LGBTIQ citizens to be themselves with full rights is a top priority for our group. For over a year we have been working on a series of initiatives, including letters signed by many members of our network sent to 30 Polish municipalities to work with them promoting diversity as a source of strength for any local or regional community, we have worked with the French Secretary of State for EU Affairs ahead of his recent visit to Poland, and our member, the CoR rapporteur on this strategy, Kate Feeney has contributed significantly to the resolution in the European Parliament. More than ever, we embrace equality and diversity and we stand together in our support of freedom for LGBTIQ citizens across Europe”

First exchange of views on the rapporteur’s opinion; Kate Feeney (Fianna Fáil) of Dún Laoghaire-Rathdown County Council presented the preliminary outline of her report on the EU’s first ever LGBTIQ Equality Strategy. In a discussion with local and regional politicians from all over the EU, Kate Feeney warned of the backsliding taking place in some EU Member States, and that a closer look at the data reveals that there are large disparities from one country to another and between municipalities and regions.

She said: “Local authorities can choose to embrace equality and diversity and prosper as a result, or choose to create a climate of fear and intimidation that deprives large groups of people of their rights. Evidence shows that economies that are more inclusive are better placed to recover from hardship, such as from the COVID pandemic. But this is also a question of people’s wellbeing and the level of mental health problems within the LGBTIQ community is very high, in particular among bisexual, transgender, and intersex people. This must be addressed when implementing this new EU strategy, and local and regional authorities have an essential and tangible role to play”

Kate Feeney was appointed as rapporteur for the Union of Equality: LGBTIQ Equality Strategy 2020 – 2025.

“We can’t tolerate infringements on European fundamental rights” argue @Pierre_Ka & #LGBTIQ strategy rapporteur @KateFeeneyFF at @EU_CoR, focusing on role of local authorities to protect rights of LGBTIQ people who have the right to be who they are: https://t.co/2732HTer6v pic.twitter.com/w6ZSipDbCY