July 2017
appointment of the rapporteur

Out of sight, not out of heart: the EU’s Outermost

The Outermost Regions (ORs), which consist of eight islands and archipelagos and one continenteal territori in South America*, offer many opportunities despite facing their very specific challenges beyond the periphery of the European Union which severely hamper their economic and social development.

The renewed strategy forms part of the EU’s ongoing reflection on the future of Europe and the design of the next programming period post-2020.

The Outermost Regions (ORs) comprise a group of eight islands and archipelagos (spread across the Caribbean, the Indian Ocean and Macaronesia) and an isolated mainland territory in the Amazon rainforest, which include six French overseas communities (French Guiana, Guadeloupe, Martinique, Mayotte, Réunion, and Saint Martin), the two Portuguese autonomous regions (the Azores and Madeira) and one Spanish Autonomous Community (the Canary Islands).

These regions share specific constraints, the combination and persistence of which severely hamper their economic and social development. Rapporteur Clavijo Batlle will thoroughly update the way that ORs are taken into account in European policies and provide a response to the expectations of European citizens in these regions.

27 -28 June President Clavijo signed the Cohesion Alliance in name of the Outermost Regions, which was covered by Spanish media such as in Europa Press, Expansion, La Provincia, El Diario, Canarias 24 Horas. After the signing coverage was available in Euractiv, El Diario, Noticias Canarias, La Vanguardia and Yahoo Noticias. 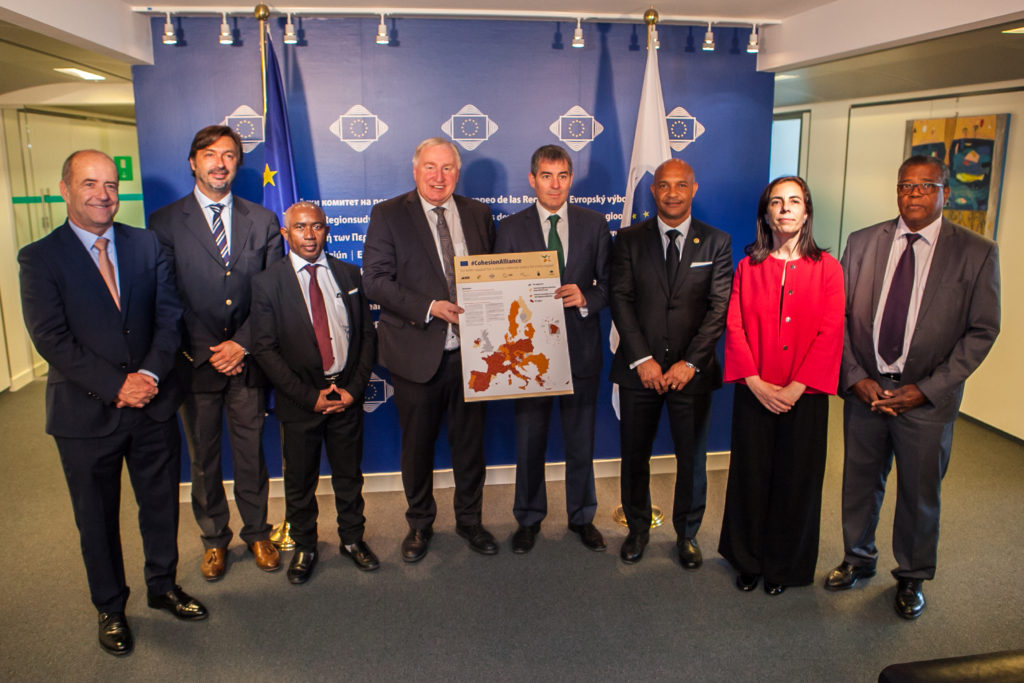 14 April The Canary Islands and other Outermost Regions can be a launching platform for the EU in terms of renewable energy and other fields argues Fernando Clavijo, as reported in Spanish media such as La Vanguardia and La Provincia.

13 April “The Challenges and opportunities for economic, social and territorial development in the outermost regions” – COTER commission’s external seminar to contribute and follow-up on Fernando Clavijo’s report by enabling an exchange between representatives of cities, regions, European institutions, experts from the EU and civil society.

Canary Island President Clavijo also participated in a EU dialogue on the future of Europe about “Europe and the Canary Islands: configuring the future”.

11 April The future of the Outermost Regions will be debated in the Canary Islands for the COTER-seminar of the European Committee of the Regions, Spanish press reports in, among others, La Provincia and El Periodico de Canarias.

9 April Ahead of the COTER-seminar of the European Committee of the Regions “The challenges and opportunities for economic, social and territorial development in the outermost regions” in Tenerife Spanish press covers this exchange of representatives of cities, regions, European institutions, experts and civil society in Europa Press, La Provincia, 20 Minutos and ABC.

27 March President Clavijo gathered 70 EU experts to debate on the future of the Outermost Regions; covered in La Provincia.

12 March Spanish press report on President Clavijo’s meeting with the EU’s Brexit negotiator Michel Barnier – Clavijo, holding the presidency  of the ‘Conference of the Presidents of the Outermost Regions’, defended the position of the outermost regions on Brexit and the future EU budget, summarized in the opinion adopted last Plenary Session. Euractiv, El Confidencial, Hoy, El Diario, El Dia, and Tribuna de Canarias all report.

15 February Working visit of Daniel Gibbs, the President of the Overseas Collectivity of St. Martin. Both presidents discussed the role of Outermost regions in the EU and the relations between the Outermost Regions. The visit allowed to design a common agenda.

31 January Report unanimously adopted at the European Committee of the Regions plenary session, with coverage in El Confidencial, Noticanarias, Noticanarias, Europa Press, among others.

29 January Spanish media report on the upcoming report of Fernando Clavijo for the European Committee of the Regions plenary session in for instance: Noticanarias , 20 Minutos, Europa Press,  La Vanguardia.

December 2017 Ahead of the adoption of the report in the COTER comission Spanish media cover the visit of Fernando Clavijo, President of the Canary Islands, in La Vanguardia and El Dia, among others.

26 October 2017 After the European Commission’s launch of its strategy for the Outermost Regions, the President of the Canary Islands Fernando Clavijo held bilateral talks with European Commissioner for Regional Policy Corina Cretu about the work programme of the Presidency of the Canary Islands on the matter. Media reports via Europa Press, Noticias Canarias, Diario de Avisos.

September 2017 First discussion within the Commission for Territorial Cohesion Policy

The president of the Autonomous Community of the Canary Islands and CoR rapporteur on #outermost regions @EquipoClavijo signs the #CohesionAlliance declaration to support strong #cohesionpolicy beyond 2020. #COTER pic.twitter.com/sfu7CedRNx
— CoR (@EU_CoR) 13 December 2017