More than 20 mayors from across Europe gathered to discuss the rule of law and LGBTIQ rights with European Commission Vice-President Vera Jourová, Michal Šimečka MEP of Renew Europe, and Dirk Wedel, State Secretary, Ministry of Justice of North-Rhine Westphalia.

Vice-President of the European Commission Věra Jourová kicked off the 7th Liberal Mayors Summit with a passionate defence of the rule of law in our Union:

Democracy and the Rule of Law are core values that define us as Europeans – the EU is based on the respect of the Rule of Law. We don’t have a common army or language, but we are together because we share its principles and foundations. That is why we have to protect and defend these every day, to guarantee our institutions in place, to uphold our checks and balances

Michal Šimečka, MEP of the Renew Europe Group, stressed that Mayors and regional leaders have an opportunity against authoritarianism: making citizens aware that there is another type of administration is key to fight authoritarianism, and added:

The EU is not a federal state and it absolutely relies on the trust on Member States and cooperation between these. This trust is based on the assumption that all these countries are democratic and that they respect the Rule of Law. When this trust breaks down, everything starts to fall apart.

We are reaching out to Polish Mayors to initiate a dialogue and promote diversity as a force for good, working to reinforce EU values

LGBT-free zones are against basic human rights. It’s important that Liberal Mayors will try to reach their peers in Poland offering a dialogue about fundamental European values

The Summit, led by Renew Europe CoR President François Decoster, Mayor of Saint-Omer, France, digitally gathered more than 20 Mayors from 12 different countries on Thursday 26 November 2020, discussing upholding the Rule of Law in Europe with a keynote address by Vice-President of the European Commission Vera Jourova, with special guest reactions by Dirk Wedel, State Secretary, Ministry of Justice, of North Rhine Westphalia and Michal Simecka MEP, EP rapporteur on EU Mechanism on Democracy, the Rule of Law and Fundamental Rights.

ALDE celebrates 10 years in the Committee of the Regions by re-electing Bas Verkerk as its President, and electing him as its candidate for the Presidency of the institution

A new strategy for the Atlantic to promote economic recovery 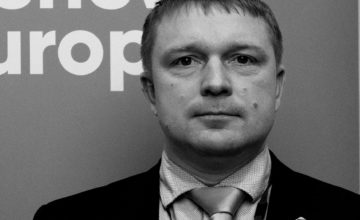