This article was published under the 2015-2020 European Committee of the Regions mandate, and runs through the current mandate 2020 – 2025.

September 2019
Appointment of the rapporteur

This own-initiative opinion will enable the European Committee of the Regions to propose solutions on issues such as intensive tourism, the role of booking portals, sustainability of tourism, preservation of heritage sites and present a vision for a sustainable tourism strategy for regions, by taking into account European and global trends that affect regions but cannot easily be managed by them.

Manuel Alejandro Cardenete is Vice-Minister in the office of the Vice President of the Andalusian government in charge of Tourism, Regeneration, Justice and Local Administration. He is vice president of the Executive Committee of NECSTouR (Network of European Regions for Competitive and Sustainable Tourism) an important partner of the CoR and the NAT commission on Tourism. He is also Professor of Economics at Universidad Loyola de Andalucía and Vice-Rector of Postgraduate Studies and Director of Loyola Leadership School. He previously worked for the European Commission and is fluent in English. As rapporteur, besides being highly versatile, he will be backed by the administration of Andalusia, a region that is an important tourism hub.

What are the consequences of the invasion of Ukraine on the tourism sector in Andalucia? Cardenete explains the effects in this op-ed: 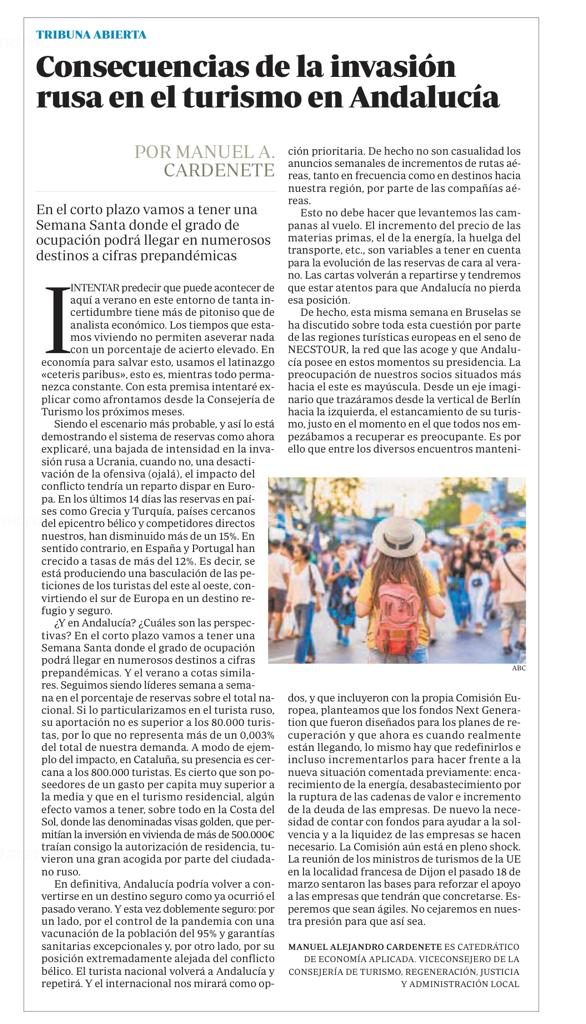 Manuel Alejandro Cardenete, Deputy Minister at the Regional Ministry of Tourism in Andalucia, and Renew Europe CoR Coordinator for Natural Resources and Tourism was elected President of NECSTouR during the annual general meeting on 22 September. NECSTouR is the voice of European regions committed to economic, social and environmental sustainability through tourism – an increasingly important driver of destination competitiveness. 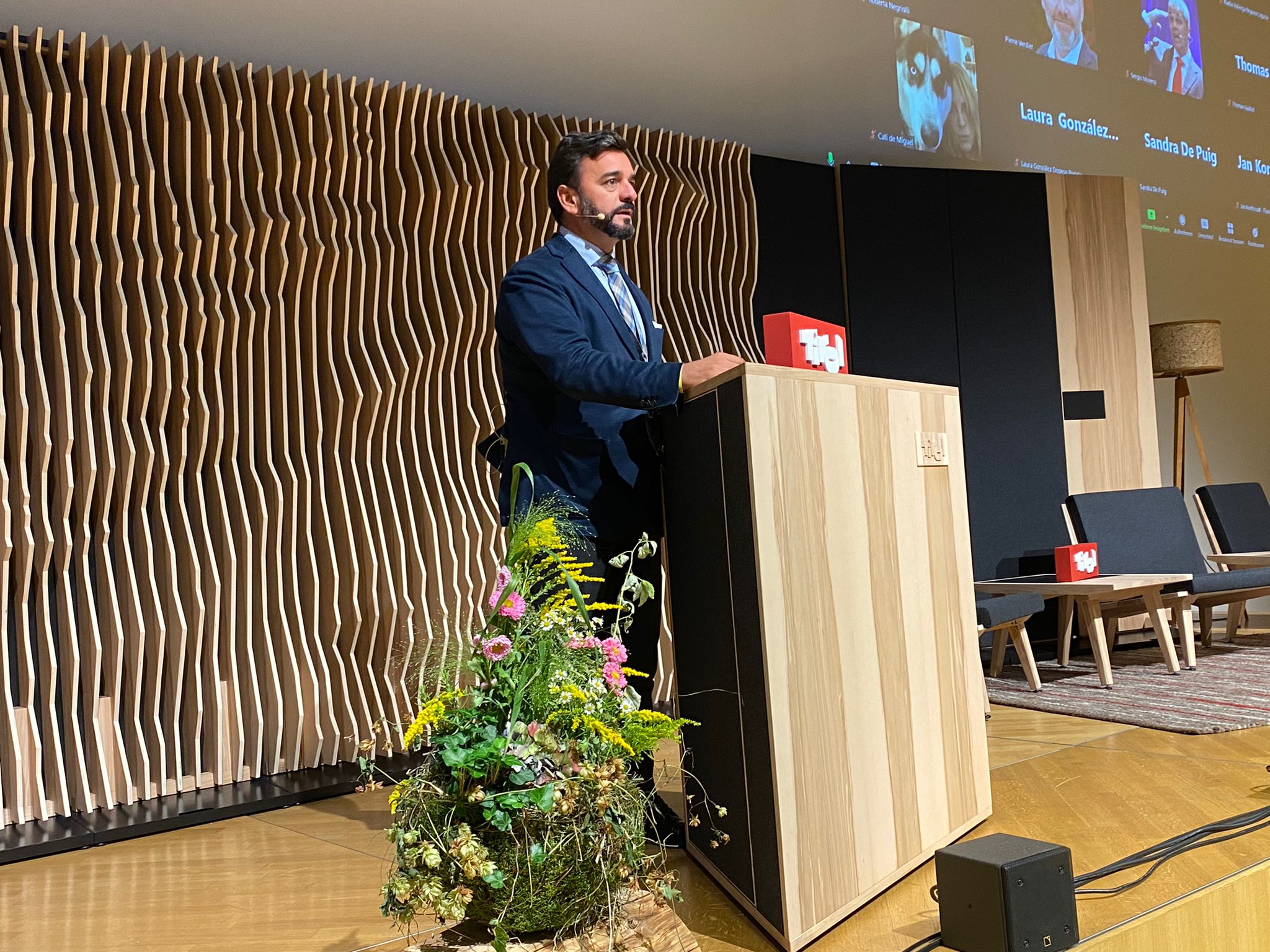 Mayors Forum on Tourism and the Future of Cities

The mayors of some of the world’s leading destinations met in Porto to rethink urban tourism in the post-pandemic age. Organized by UNWTO, the Government of Portugal, Turismo de Portugal and the City of Porto, the Mayors Forum on Tourism and the Future of Cities highlighted the opportunity to restart urban tourism with a focus on sustainability, innovation and inclusion. Manuel Alejandro Cardenete presented his report on the future of Tourism there, focusing on the need for tourism as an essential part of the economy to become sustainable, innovative and inclusive.

Press coverage in, among others, Europa Press, Teleprensa, or on the UNWTO website. 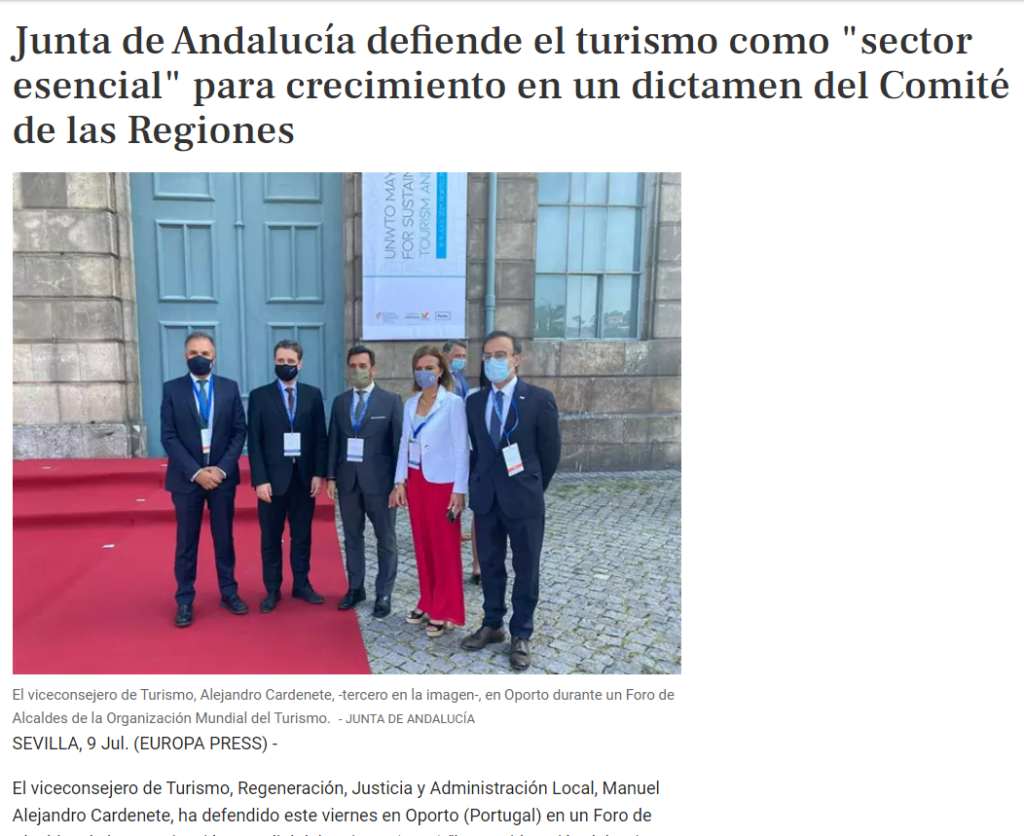 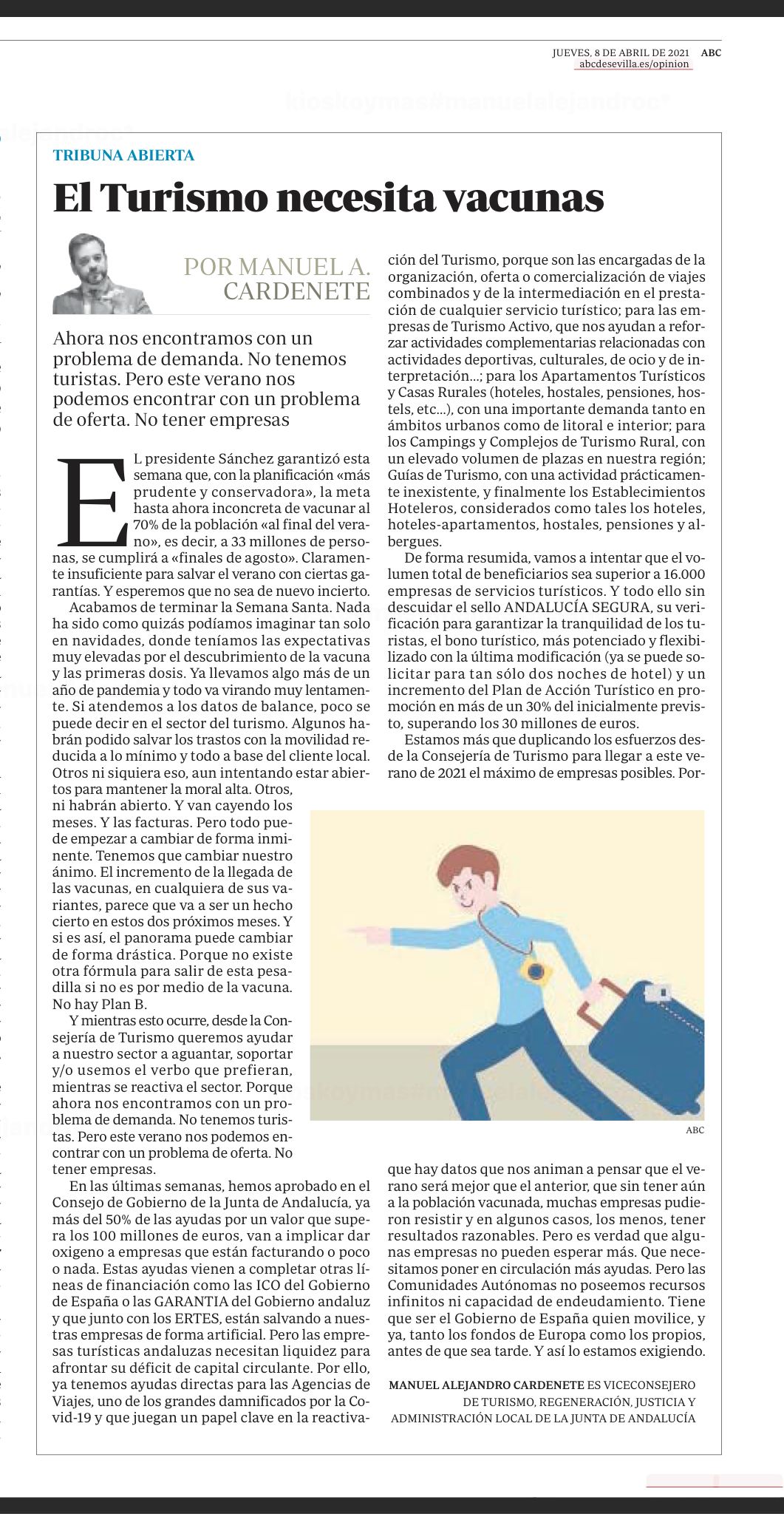 In Spanish newspaper La Rázon Cardenete contributes an opinion piece about the future of tourism; he hopes that the Covid-19 crisis serves as a wake-up call that spurs the European Commission to follow a more ambitious tourism policy: 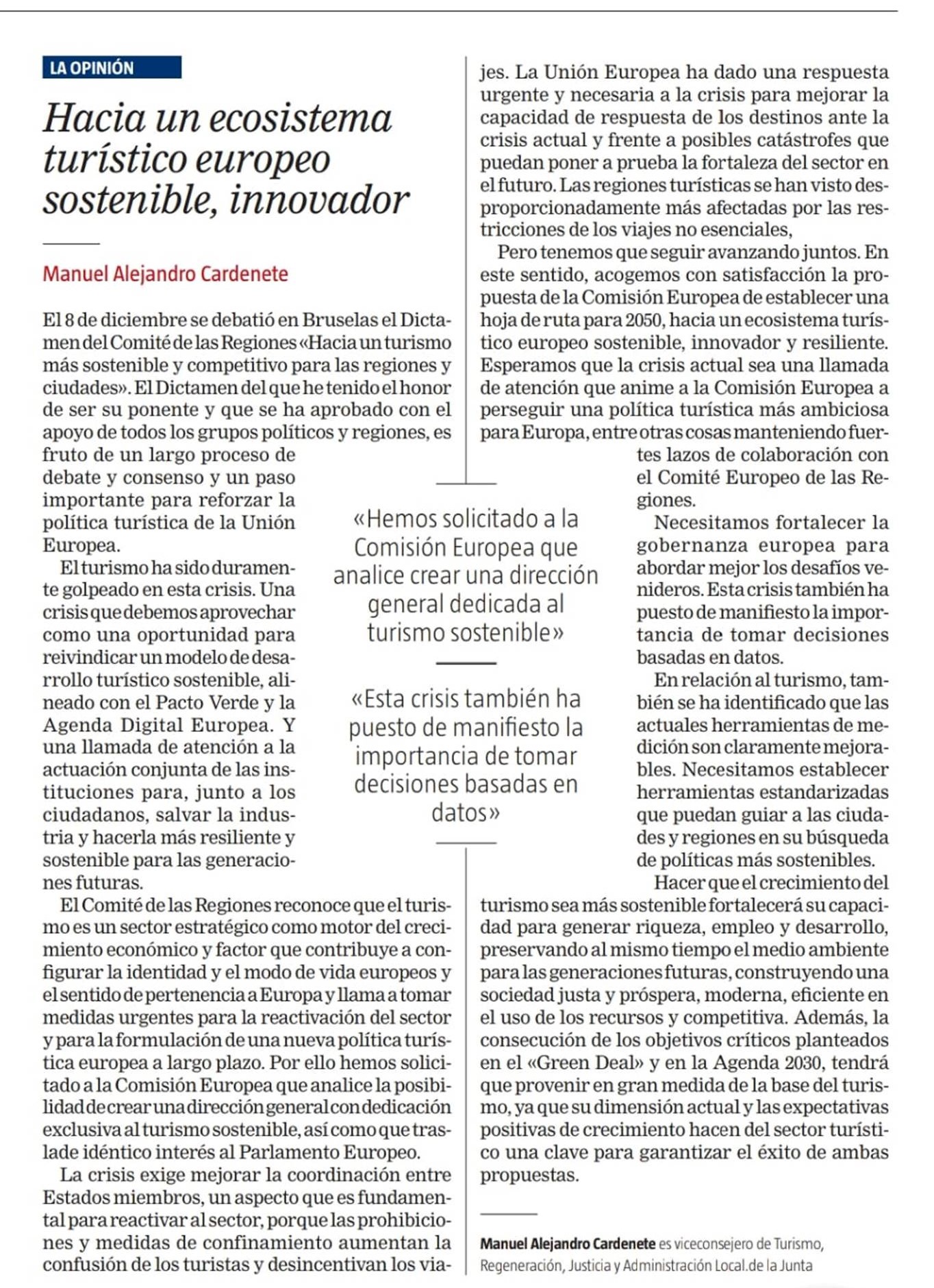 In an interview published on the website of the European Committee of the Regions, rapporteur Cardenete answers four questions on sustainable tourism, describing how the region of Andalusia develops new strategies based on digitalisation and sustainability. 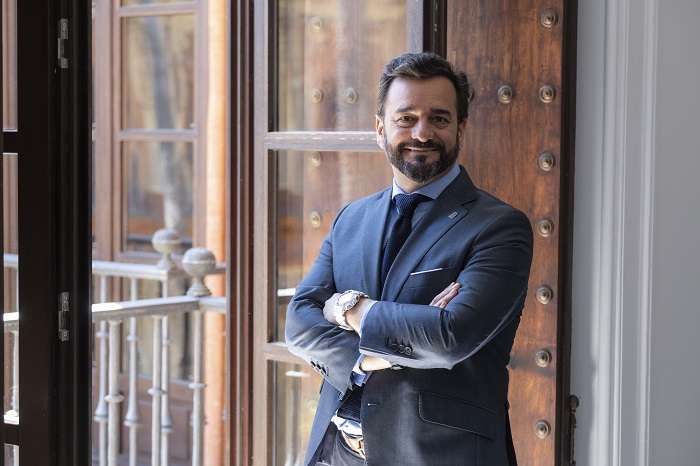 The European Committee of the Regions adopts Cardenete’s report. The press release “Regions and cities for using the crisis to spark a debate on resilience and sustainability in the tourism sectors” quotes the rapporteur: “The crisis accelerated the urgency of the measures needed to respond to these challenges and to ensure the safety and well-being of residents and of visitors. We think that tourism has the capacity to give the answer with adequate policies and with the necessary investments, but always leading the transformation of the model of sustainability proposed by the Green Deal and Digital Agenda of the European Union.” 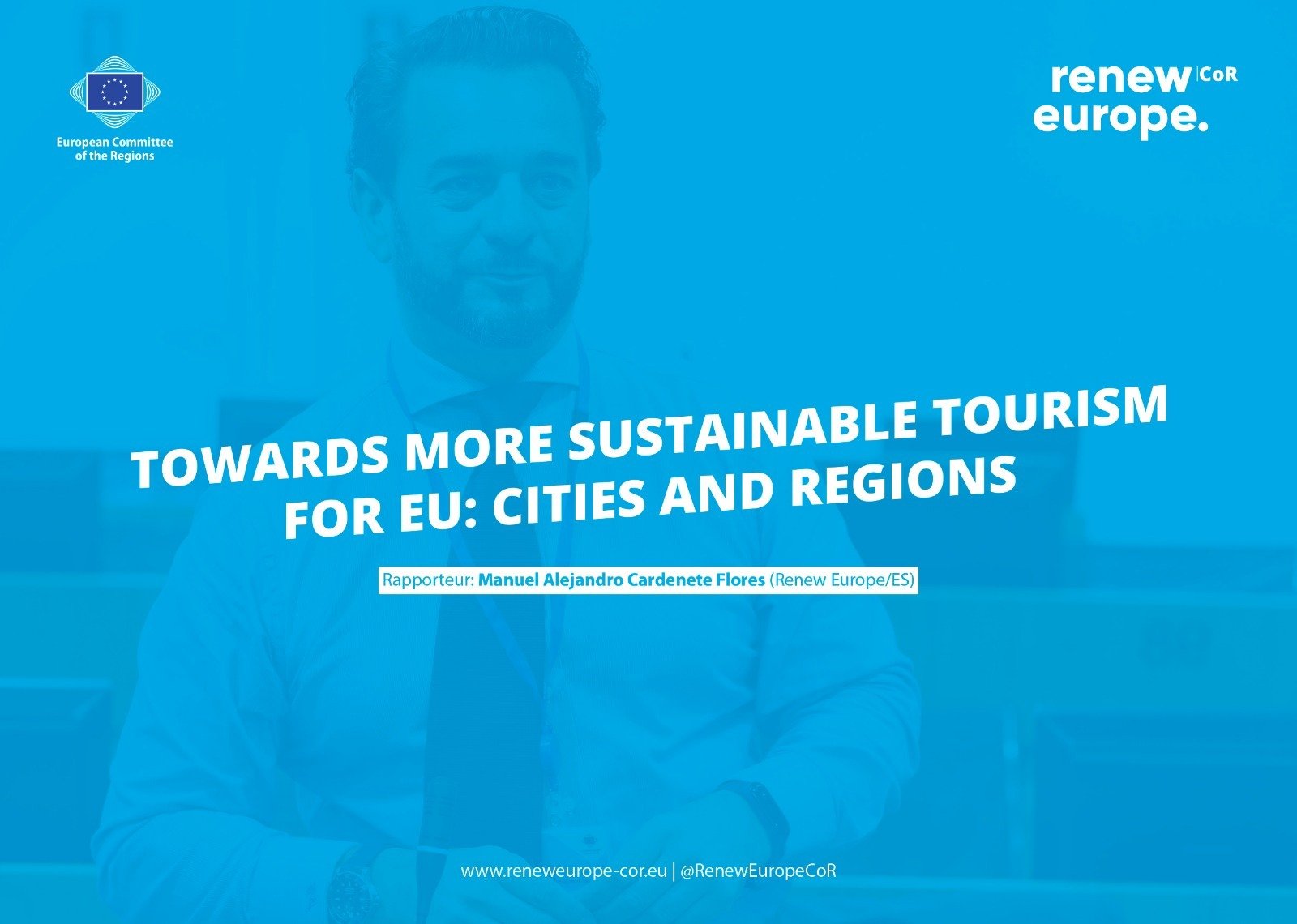 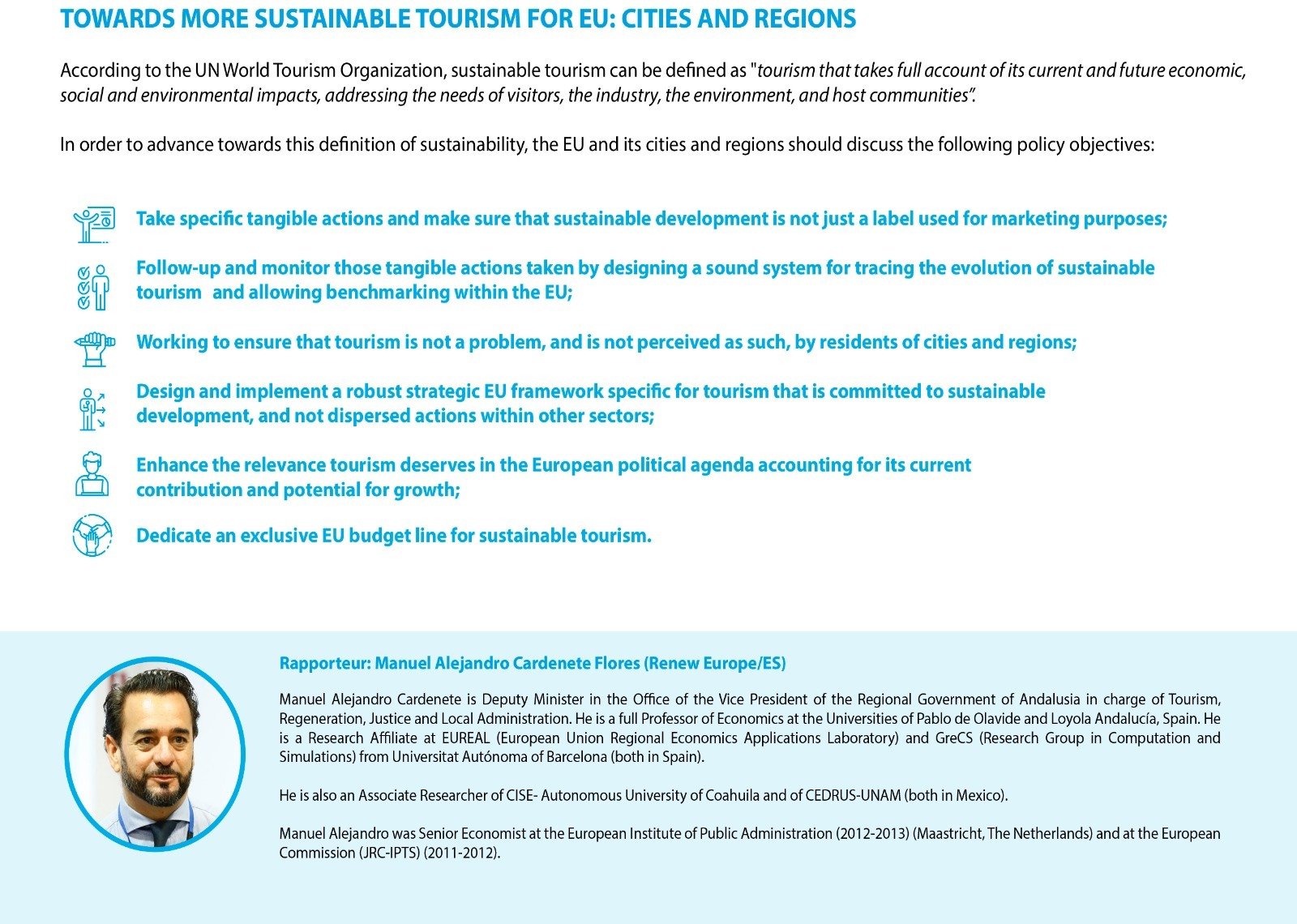 Cardenete’s report adopted in the Natural Resources Commission of the European Committee of the Regions. During the NAT-meeting Cardenete said: “Making tourism growth more sustainable will reinforce its capacity to generate wealth, employment and development, while preserving the environment for future generations, building a more just and prosperous, modern and efficient society in the use of our resources.” More can be found on the page of the Junta of Andalucia. His intervention (video) can be found here. 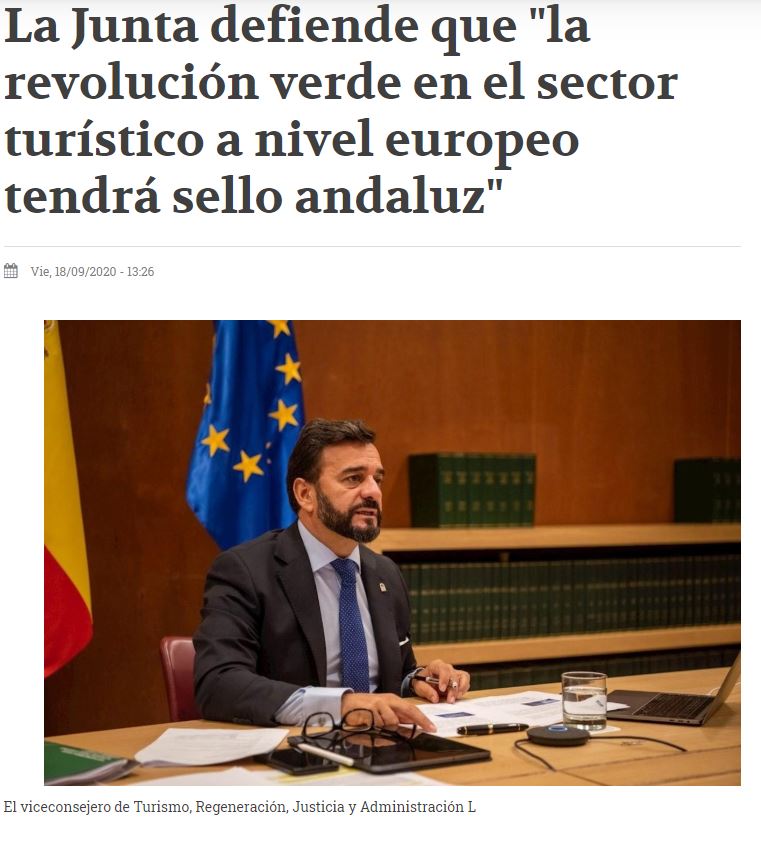 The NAT Commission adds the topic of “Tourism and transport in 2020 and beyond” and integrates it into this ongoing report on the future of tourism for EU cities and regions, while also appointing Cardenete as jury member for the European Capital of Smart Tourism Award.

Tourism is a key sector to highlight during these difficult times, argues Cardenete in an opinion piece to Spanish newspaper La Razon.

“Andalusia cannot afford to lose a sector where we have an undoubted added value: quality, infrastructure and positioning. Now we add a new value: security.” 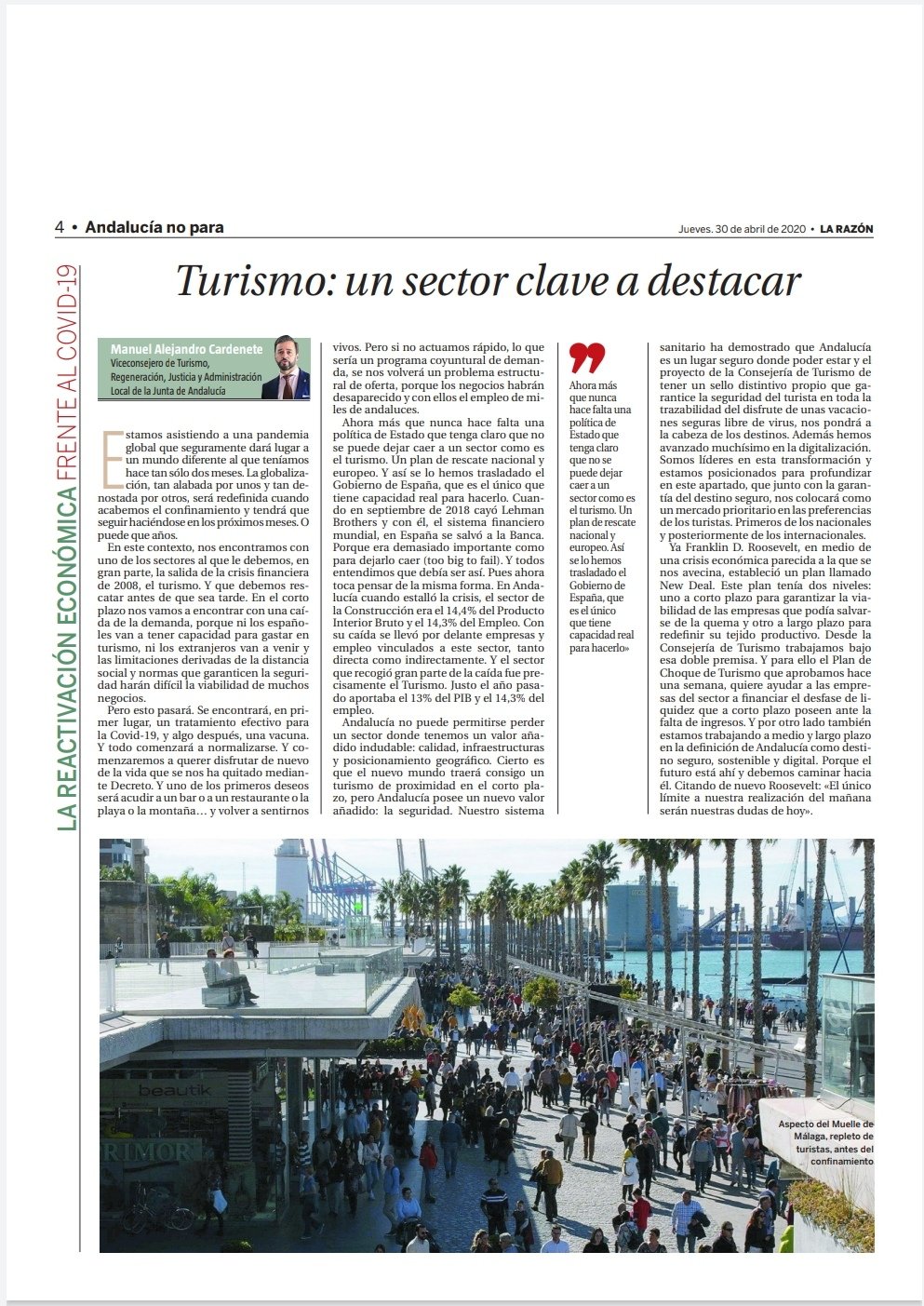 Exchange of views on Cardenete’s report in the Natural Resources commission of the European Committee of the Regions.

Rapporteur Cardenete chairs the event “Sustainable Tourism: current challenges and opportunities” at the ALDE Party Congress in Athens, Greece. The interactive discussions explored various challenges that cities and regions face due to tourism: impact on the environment and local life, precarious job and increasing competition worldwide. It is important to address these challenges while enabling Europe to remain the world’s number one destination. Cardenete lead the panel consisting of our Vice-President Ulrika Landergren and Ivan Gulam, Mayor of Pirovac, Croatia, and exchanged ideas and best practices with about 50 stakeholders.

Spanish website Hosteltur covers the European Committee of the Region’s focus on the lack of benefits of tourism for regions and cities, highlighting Cardenete’s proposals.

♻️#Sustainability isn’t an alternative anymore
👉🏼It’s a necessity for the #tourism sector@macarflo presents his report on the sustainable future of tourism: https://t.co/tG9MJX47Bv. https://t.co/jSqnl6LTwK

🇬🇧 NAT Commission @EU_CoR has decided to sign me as Jury for the European Capital of Smart Tourism. Thanks for the proposal. I will try to do my best.

Thank you for this upgrade and responsability @EU_CoR. It will be a pleasure. pic.twitter.com/qn9CkvrVjm

“#Sustainable #Tourism should stop being a label and become a reality” argues @macarflo at our event @ALDEParty #Aldecongress, drawing on his region of Andalucia’s experiences dealing with massive increase of visitors. pic.twitter.com/8Q3kLHDnDt

“Are tourists killing #tourism?” At @ALDEParty #aldecongress in Athens, we’ll explore with @macarflo the challenges cities face due to tourism: impact on environment, local life, jobs,…We need to address these while enabling Europe to remain the world’s number one destination! pic.twitter.com/hNs7JykHLI