Our President Bart Somers was named Minister for Living Together & Interior in the new Flemish government, bringing his experience in successful integration.

Somers (Open Vld), Mayor of Mechelen since 2001 and re-elected in 2018 by a historic margin of 48% in his city, a never-before-seen absolute majority; also leader of the liberal group in the Flemish Parliament,  will now be the Flemish minister in charge of Living Together / Integration and the Interior, as well as being Vice Minister-President.

Elected as President of the Renew Europe Group in the European Committee of the Regions in October 2016, Somers received international praise for his work in preventing radicalisation in his city of Mechelen, showing that local and regional authorities have the power and are the level best suited to deal with this phenomenon.

In February 2017 Somers was awarded the 2016 World Mayor Prize for his outstanding achievements in welcoming refugees during recent years and for the long-term integration of immigrants from different cultures, religions and social backgrounds.

Somers will continue to serve as President of Renew Europe CoR until the end of the CoR mandate (January 2020) and is expected to be re-appointed as member of the Belgian delegation for the new CoR mandate.

Matúš Vallo, Mayor of Bratislava, on COVID-19, Free Cities Pact and the EU 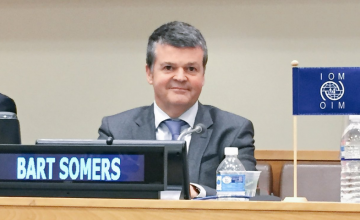