The cultural and creative sectors (CCS) are seriously affected by the COVID-19 crisis, and the rapporteur calls for a culture of solidarity in the recovery phase. We need to ensure that cities and regions are aware of measures and initiatives put in place for CCS in the EU, and make practical suggestions on how CCS can better participate in the latest proposals for Creative Europe, Horizon Europe, REACT EU, SURE, CRII+, the European Guarantee Fund, etc;

Culture should be promoted as a key driver for strengthening the European identity and argument made for it to have a more prominent place in the discussion on the Future of Europe.

The main objective of the draft opinion will be to speak with a strong voice in support of CCS, seriously affected by the COVID-19 crisis, and to call for a culture of solidarity in the recovery phase. 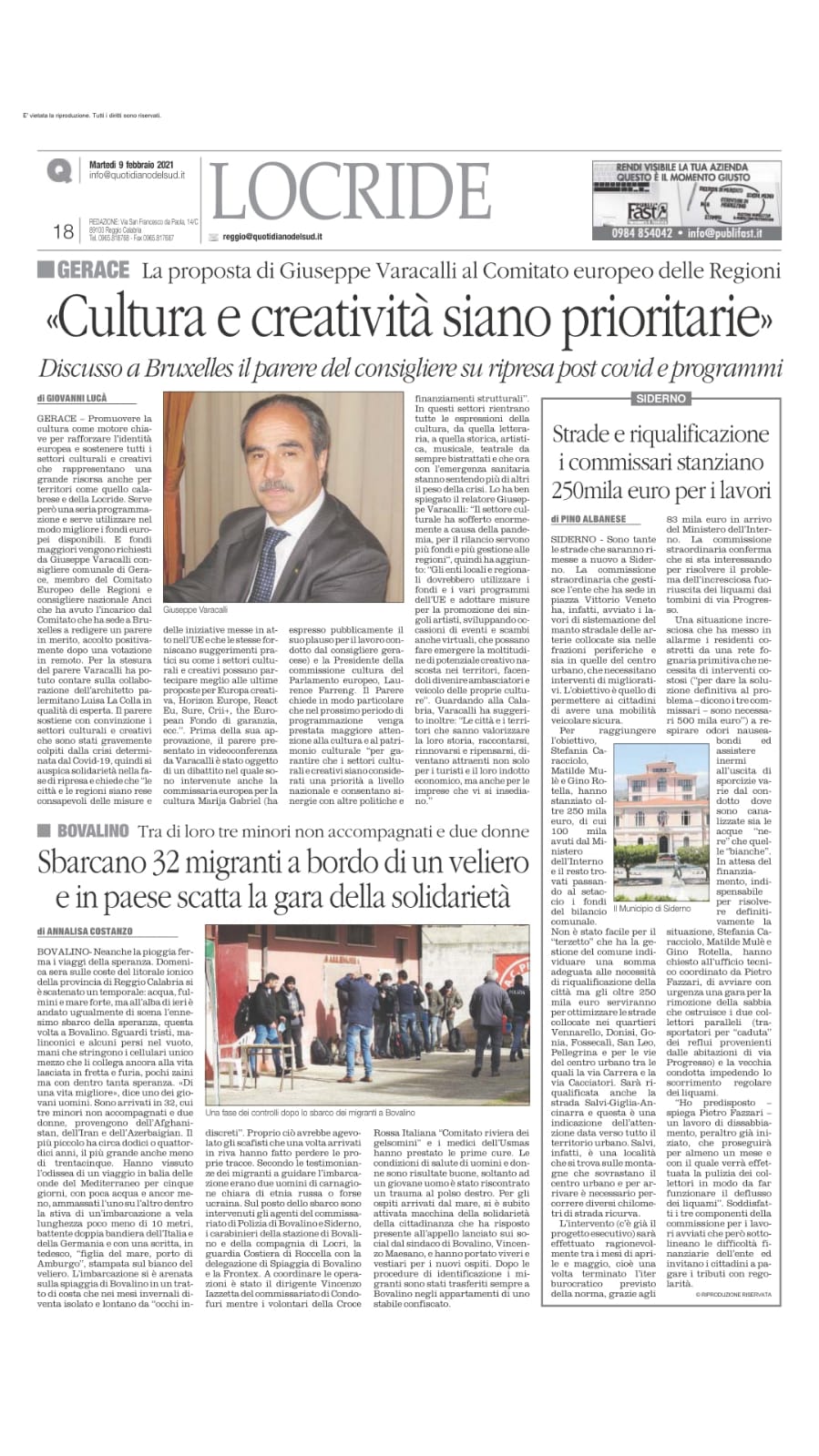 Italian media cover the report on the relaunching of the cultural and creative sectors in, among others, Il Domani and Lente Locale. 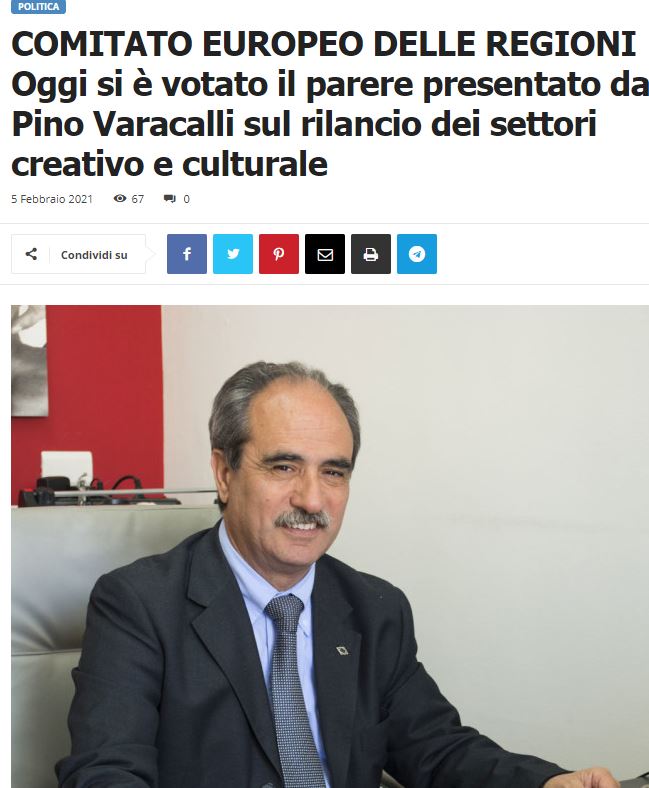 REPORT APPROVED during the European Committee of the Regions Plenary

Interview with the rapporteur for Total EU Production on his report on relaunching the cultural and creative sectors.

During the European Committee of the Regions Plenary, Regions and cities called for bolder support to cultural and creative sectors to cope with dramatic economic loss in a debate with European Commissioner Mariya Gabriel.

Rapporteur Varacalli said: “Local and regional authorities should use EU funding and the various programmes and measures to promote individual artists and develop opportunities for events and exchanges, including on a virtual basis”.

Varacalli urges to integrate investment from various EU funds in culture, to simplify the procedures and to increase the possibility of co-financing up to 80% for projects by small players.

“The opinion highlights the need raised by various stakeholders for an adequate welfare system, regulating it where it is not, giving all operators in the sector, especially freelancers, the right dignity. It seems really absurd that for example in Italy, a painter or a sculptor, can open a VAT number only as craftsmen, debasing the artist’s profession, for this reason many have suffered the crisis more by working with withholding taxes and not being entitled to bonuses in times of pandemic. It also seemed important to us to give some examples of good practices aimed at enhancing the territory, these see the involvement between public and private, which is increasingly necessary and indispensable. “Fiumara d’Arte” an open-air park that walks along the course of a river and links various Sicilian villages thanks to a series of works of art, works by well-known artists such as Consagra, Staccioli, Festa and others and thanks to the initiatives that are put in place around these, the most important being “the rite of light” which sees more than 10,000 presences and artists from around the world. Another example that we believe is in line with Ursula von der Leyen’s European Bauhaus project and which we cite as an example is that of “Super Studio Group”, an excellence of innovation, image and quality in a place regenerated and turned into a multi location, a large container open to the city and to major international initiatives. But also important is the Charter of Agrigento, signed by many Italian municipalities and voted by the CoR, a pact for the protection and promotion of cultural heritage, indispensable for passing on the history of European culture to posterity.”

First exchange of views on the report in the SEDEC commission. Varacalli said: “The cultural and creative sectors alone account for 4.2% of European GDP, and with the related activities this percnetage rises well over 5%. The opinion asks Europe to act as a leverage for the Member States to use all available funding and measures to support culture, seeking not to leave anyone behind.

With the aim of including a range of different positions and so enrich the opinion, encompassing the local and regional point of view and that of associations and organisations working in the field of cultural and creative sectors, the rapporteur asked a number of questions in the form of a written consultation facilitated by the European Committee of the Regions.

During the 5th SEDEC meeting in 2020, among the opinions discussed were
🔬 A new ERA for Research and Innovation @clergeau
🎭 Restart of Cultural and Creative Sectors @Varacalli1
👇 Read below what our rapporteurs have to say#EuropeanResearchArea @PES_CoR @RenewEuropeCoR