The opinions on food waste by rapporteur Ossi Martikainen (FI, Keskusta) and tackling radicalization by Bart Somers (BE / Open VLD) were high on the agenda of the Committee of the Regions’ plenary. Further details below.

The plenary session of 15 and 16 June 2016 was the last plenary of Bas Verkerk, (NL / VVD) as President of the ALDE Group in the European Committee of the Regions. He will be stepping down as Mayor of the city of Delft in July and will subsequently no longer be a member of the CoR. Vice-President Agnès Durdu (LU / DP) will act as caretaker President until elections in October will designate a new President. Bas Verkerk joined the CoR in 2001 as member and became President of the group in 2012 . He was passionate about and instrumental in supporting the EU urban agenda within the CoR, for instance as rapporteur on the opinion “Towards an integrated Urban Agenda for the EU”, which paved the way for the Pact of Amsterdam led by the Dutch Government and signed by the 28 Member States on 30 May 2016. He also oversaw the launch in November 2015 of the Liberal Mayors Network, which helps to build a liberal Europe by stregthening the bond between liberal mayors from across Europe.

The CoR has called for the EU to cut food waste by 30% by 2025. Around 20% of the food produced in the EU each year goes to waste, equivalent to almost 173 kg per person. The opinion now sets out ideas ranging from sustainability criteria in public procurement and local sourcing of food to labelling and awareness-raising.

“There are a variety of means and innovative local initiatives for achieving the goal, long-time advocated by the CoR, of reducing food waste by 30% at EU level. Committing to an ambitious target is essential. Especially because achieving it requires no specific financial support or budget. Reducing waste saves money and nature at the same time. This is a win-win situation”

The opinion calls among other things for sustainability criteria in public procurement aimed at reducing and preventing food waste; the use of local, regional and seasonal products in catering services; and for schools to include the issue of food-waste reduction as part of the curriculum, for instance through thematic days, study visits and students learning programmes. It also advocates for a common methodology and measurements at EU level to gauge the extent of food waste and measure progress towards a common, harmonised reduction goal right across the EU.

To avert violent extremism, a long-term focus on prevention work is crucial

Rapporteur Bart Somers (BE / Open VLD) presented his much anticipated opinion on combatting radicalization, saying that “We need to be tough on crime, so that there are no parts of our cities where the rule of law is absent,” adding that there is no Belgian city that invests so much in police as Mechelen. “But there is no silver bullet to the problem of violent radicalisation, and policing alone will not stop terrorists. Prevention is where local and regional authorities can help most, and this is also the most effective area in which to work, since you have to start by looking at root causes.”

Somers continued: “We know that people are vulnerable when they feel isolated from society. So, in schools, in homes, in workplaces, and in public life, we need to bind people to our communities and values. This is a long-term investment and it needs to be carefully managed. As we say in Dutch, trust arrives on foot, and rides away on a horse.”

His opinion won cross-party support for its calls for more effective policing, for more cooperation between local, regional, national and European authorities, and for an approach based on respect for core principles. The EU’s fundamental rights “must not under any circumstances be called into question, either by the totalitarian thinking of radical groups or as part of the steps taken to fight violent radicalisation”, the opinion states. It also draws attention to the number of young women who have been radicalised. It calls for instance for tougher action against sexual intimidation and for policies that emphasise gender equality. “Gender equality is a fundamental principle of the European model of society,” Somers said, “but I also think that strengthening our young women will bind them more strongly to our society.”

Read his guest blog on Euractiv, “Combatting radicalization: how local authorities can play a crucial role“.

Liberals at EWRC: climate & forests, blockchain & trust, and cities of the future 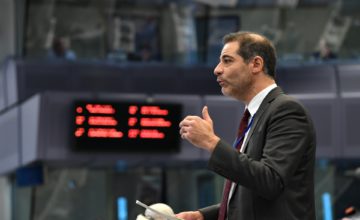