The rapporteur and Vice President of the ALDE Group in the Committee of the Regions (ALDE-CoR) Bart Somers recently presented his draft report on how to combat radicalisation and prevent violent extremism. As Mayor of Mechelen in Belgium, a very diverse city of 124 nationalities, he has firsthand experience on policies that can help local authorities preventing the process of radicalisation

“I am touching wood, but nobody left our town of Mechelen so far. And I am sure that Mechelen would be in the top three cities sending people to Syria if we hadn’t changed policies 15 years ago.” “As a mayor, I create opportunities for all of us to feel like full citizens of the city,”

His approach has sparked a larger European interest, with for instance Spanish, British and European media interested in his work in Mechelen and within the Committee of the Regions. You can for instance watch a BBC TV report on the “zero tolerance Mayor” or read articles from the EU Observer  “Mechelen, the Belgian city with no foreign fighters” or the Spanish media outlet El Espanol “The secret against radicalisation lies in a Belgian city” (in Spanish) or and an op-ed by Bart Somers called “Groupthink stigmatises, Individualism unites” in Belgian newspaper De Morgen (in Dutch).

His opinion, which will be adopted in the next plenary within the Committee of the Regions in June, can be found in all official EU languages here. 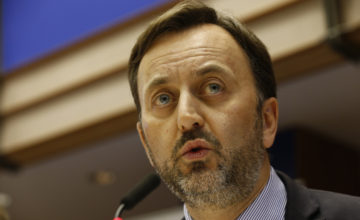 An Erasmus for good government