Europe should step up its 2030 climate ambition

The EU is currently facing the double challenge of confronting the COVID-19 outbreak and its effects on health, economy and society while keeping in track the objective of a climate-neutral Europe by 2050. Cities and regions are at the forefront of both these structural changes and the adaptations they require, calling for tailored solutions and support from the EU and the Member States. Mr. Chauvet wants to look on one side at the feasibility of reaching the 2030 CO2 reduction targets for local and regional authorities, identify accompanying measures to potentially step up the ambition, while at the same time preparing the contribution of European cities and regions for the upcoming COP26.

The 8th meeting of the Green Deal Going Local working group focused on an assessment of Glasgow’s COP26 climate conclusions and the prospects for enhanced cooperation with the United Nations in view of the next  COP27 summit, due to take place in Egypt in 2022. Members exchanged on the 2022 European Commission Work Programme, and explored synergies with the European Commission’s “Next Generation EU” campaign, which also aims at raising awareness on the Green Deal and mobilising youth to take climate action. During the meeting, members raised concerns about energy prices, which risks delaying the much-needed social, economic and green recovery from the Covid-19 pandemic across the EU. Chauvet said: “The EU was a driving force in Glasgow, though this was not sufficiently reflected in the reporting and media outreach of COP26. At the CoR and EU level, we need to ensure that multilingualism is the new rule at COP27. This is of particular importance if subnational actors are to effectively convey their messages and to raise awareness in local and regional audiences. This approach is even more significant as the next COP will be organised on the African continent.”

As rapporteur on “Stepping up Europe’s 2030 climate ambition towards COP26” and part of the CoR-delegation, Vincent Chauvet, Mayor of Autun, successfully defended and worked for the recognition of the important role of local and regional governments, but also non-party stakeholders, such as civil society in contributing to progress towards the goal of the Paris Agreement. Le Journal de Saône et Loire covered his participation in their newspaper. 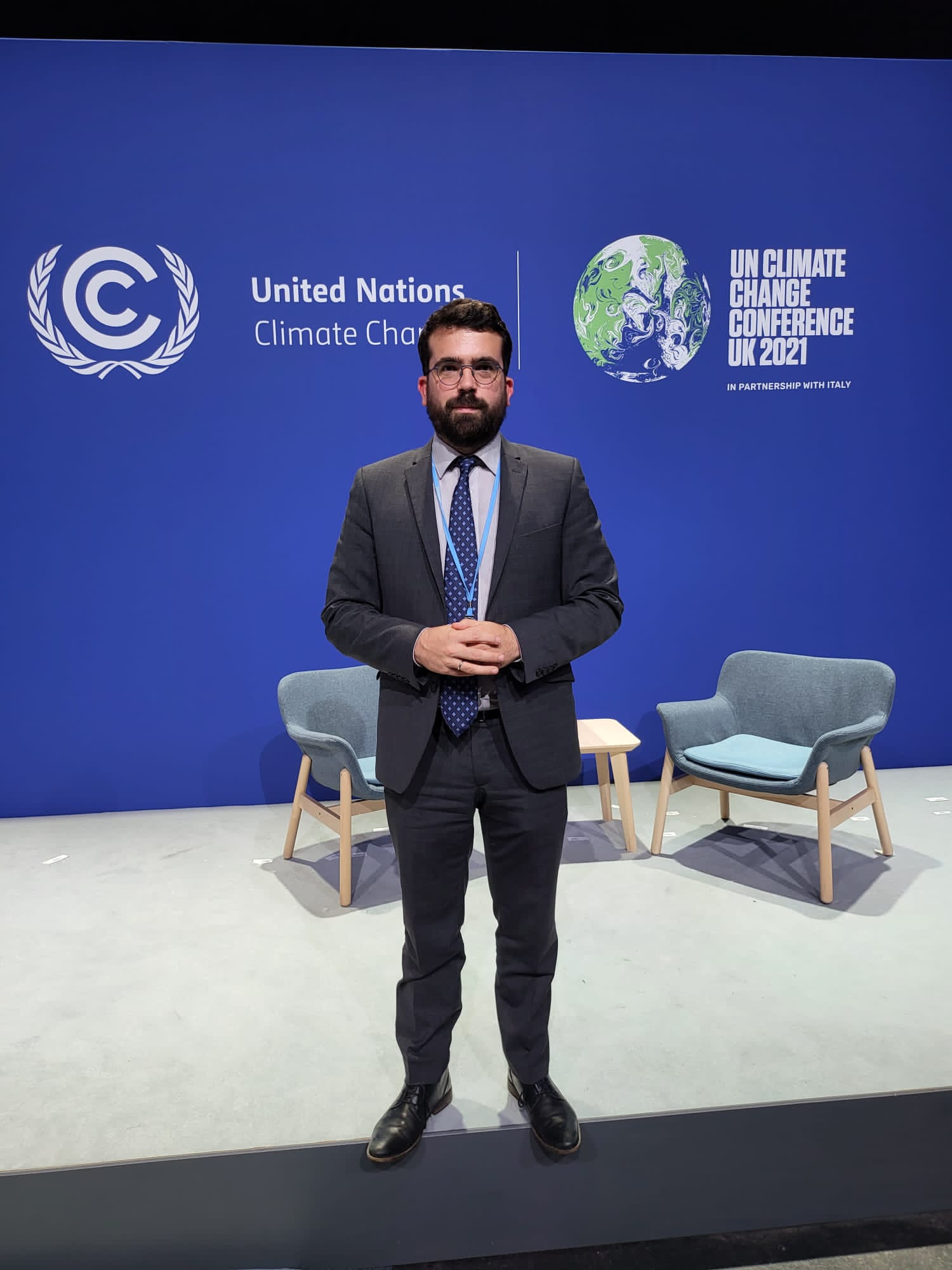 Vincent Chauvet at COP26 in Glasgow

During EuroPCom 2021, the largest annual meeting point for experts in the field of public communication, Chauvet was the main speaker for the “European Climate Pact” workshop. The session can be viewed on the EuropCom website.

“Dialogue for Climate Action. Subnational governments calling for raising ambitions towards COP26” – Pre-cOP26 event in Milan, Italy. Vincent Chauvet participated online and spoke as part of the third panel “We commit to: how are regions increasing ambition and accelerating action in 4 areas: mitigation/adaptation/financing and collaboration.

Reacting to the Fit for 55 package of the European Commission, Vincent Chauvet argues about what role local and regional authorities should play within the EU Green Deal and the Fit for 55 package: “The EU is relying on expanding CO2 markets, bans on polluting vehicles and Carbon border tax is ok, but how will European cities be accompanied to convert to CO2-neutral municipalities by 2050 and also how will local and regional authorities efforts be measured and taken into accounts in order to monitor progress and reach national & EU targets?

Rapporteur Chauvet’s report was adopted during the European Committee of the Regions plenary session with large support. Chauvet argued that local and regional authorities’ contributions to tackling climate change need to be measured, included and valued under the Paris Agreement. At the plenary session, Chauvet said: “The EU will not be able to achieve its climate goals without involving local and regional authorities and giving them the necessary means to implement measures to combat climate change. To that end, we must make the process of accessing funding less complex and provide technical engineering assistance. We also need to take into account the specific features of each region to ensure a just transition that is acceptable to all Europeans. In connection with the upcoming United Nations Climate Conference, we call for the climate contributions of local and regional authorities to be measured, included and valued in national contributions.” 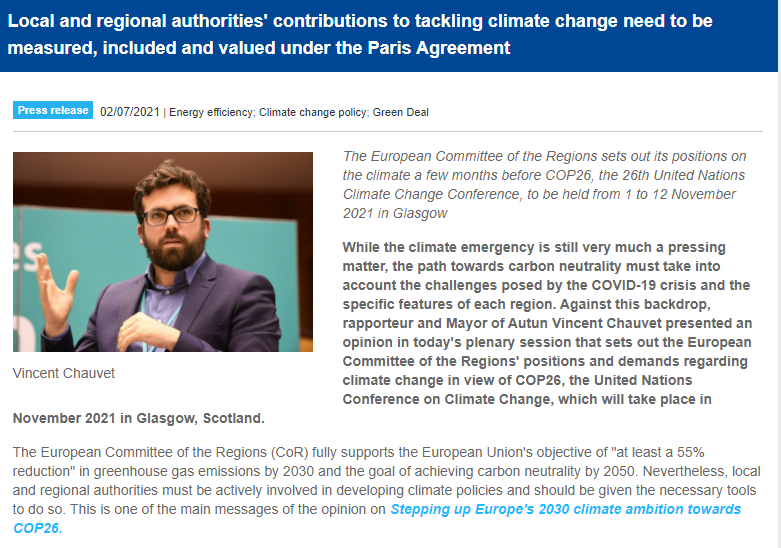 Interview with FEDARENE, the premier European network of agencies and regions at regional and local levels. It was established in 1990 to represent and promote the local and regional dimensions to the European institutions. FEDARENE organises exchanges of experience and partnerships between its members. It now has more than 80 members in 23 countries in the European Union.

Interviewed by Euractiv Slovakia, Vincent Chauvet discussed the Union’s new emissions targets, which are radically different from the old ones because they require a systematic change in the way we live our lives. This will also affect the transport sector. Rural areas, in particular, may struggle to adapt, warns Vincent Chauvet, mayor of the French town of Autun.

“The new 2030 targets and the 2050 carbon neutrality target are fundamentally different from the previous targets. The old targets required only piecemeal changes to existing systems. The new ones require fundamental and systematic change,” Chauvet said at a webinar organised by the European Committee of the Regions and the Petržalka Youth Parliament.

Rapporteur Chauvet participated as subnational leader and reacted to the keynote discussion on “Cities, counties and States in the 2nd US NDC – US 2nd NDC and multilevel Action towards Glasgow COP26”, a special webinar by the Climate Group. 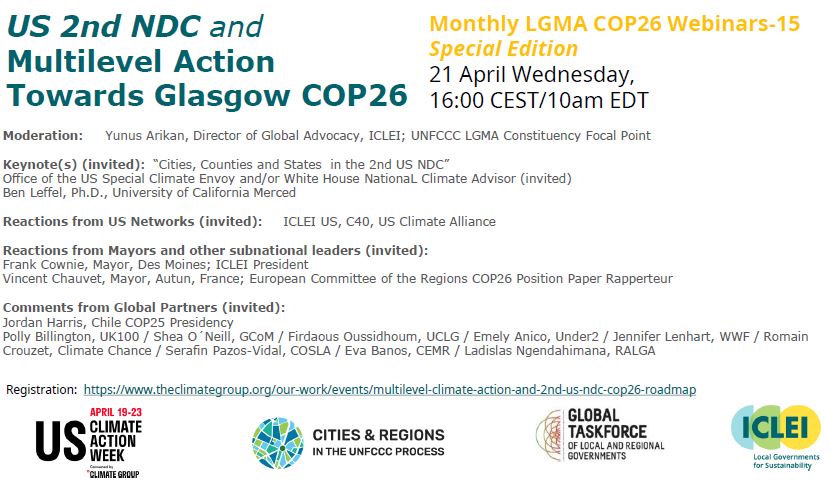 In the ENVE commission of the European Committee of the Regions, debated Chauvet’s report with a vote on Monday29/Tuesday 30 March 2021. The report was approved by the ENVE-commission; the rapporteur managed to offer a basis for compromise across all political families.

Bilateral meetings with Fedarene – European Federation of Agencies and Regions for Energy and Environment, Filip Dumitriu and Dominique Bourges. on the role of local energy agencies that act as intermediators with local governance structures, their best practices in capacity building and peer-to-peer exchanges.

Bilateral with the Covenant of Mayors. Meeting with Frederic Boyer CoM and Eugenia Mansutti – Eurocities, Brieuc Posnic (European Commission), Ero Ailio, DG ENERGY: on the ways how to increase multilevel governance in climate matters by creating an umbrella platform that would gather all different local and regional efforts and increase the visibility and therewith efficiency of the Covenant of Mayors;

Bilateral with Cecile Hanoune, Deputy head of Unit of Unit C1 Strategy and Economic Assessment of DG Climate + Zevgolis Dimitrios, Deputy Head of International Relations Unit, Deputy Head of the EU Delegation to the UN Climate Change Convention, DG CLIMA, European Commission: Exchange with EC representatives on the vision of the EC when proposing the 55% increase of CO2 reductions by 2030, how the EC perceives the application of active subsidiarity, especially in terms of climate policy and on the possibility to get the support of the EC on expanding the system of nationally determined contributions at the COP26 also to locally and regionally determined data.

Our Rapporteur Vincent Chauvet discussed with young local and regional politicians from Germany, Hungary, Greece and Slovakia to get their view on how the 55% target for Co2 reductions can be implemented in their communities. They identified hurdles, exchanged best practices and thought together of a way forward toward a green and just Europe. The involved young local and regional politicians were: Jung Christine, Social Democrat, City Council member, Saarbrucken, Germany (old coal region); Behúl Miroslav, EPP, member of the Petržalka Local Council, a district in Bratislava, Slovakia; Moras Athanasios, Thessalien region, Greece and Monika Andresek, Erd, Hungary. 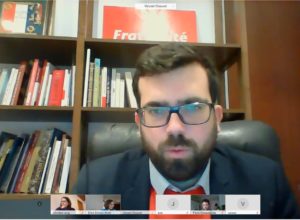 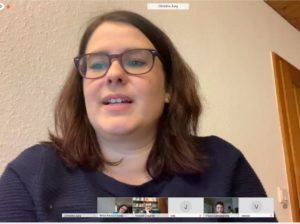 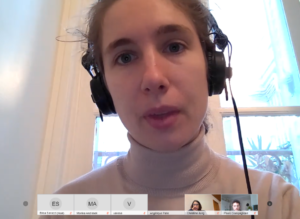 On Euradio.fr, Interview with Vincent Chauvet how as a Mayor he can weigh on European decision-making and how he has dealt with the pandemic [among other topics].

Chauvet speaks at the The United Nations Framework Convention on Climate Change (UNFCCC) Presidency Dialogue. The main purpose of this session is to continue exchanging views and sharing information, on topics developed in consultation with constituencies, between observers and Parties to maintain momentum in the UNFCCC process and to showcase how climate action is progressing under the special circumstances the world is currently facing. This will help facilitate dialogue, help enhance the engagement of observers, and gather views from observer stakeholders, Parties and groups.

Talking at URBACT Network Activities & Mayor’s conference (URBACT is a European exchange and learning programme promoting sustainable urban development) on Energy Neutrality by 2050: a network of cities and its Mayors mobilize”, Chauvet addresses Mayors who are making efforts to become energy neutral by 2050: “Let’s municipalize Europe. Let’s act as cities, large and small, and let us become an essential partner of the energy transition for the benefit of all our citizens”.

As part of the European Committee of the Regions Green Deal Working Group launched on 15 June 2020, Vincent Chauvet suggests buying natural assets such as forests, as they have an important role to play in biodiveristy:

“Another suggestion is the buying of natural assets through the green deal, e.g. forests, having an important role for biodiversity. One of the possibilities would be for the EU to buy forests through LRAs in order to manage them sustainably and making sure they are in mid and log term profitable. We have done this in my constituency, and it is certainly a best practice to share.”

Stepping up EU’s 2030 #climate ambitions, @vincentchauvet works on identifying what cities & regions need to reach at least 55% of #CO2 reduction or more by 2030: https://t.co/Eu6IdFJGxe. pic.twitter.com/GeZkBMea9w

.@vincentchauvet, part of the new @EU_CoR #GreenDeal Working Group launched today, suggests buying natural assets such as forests, as they have an important role to play in #biodiversity:
➡https://t.co/ysScs1Yb7f pic.twitter.com/9k01dQkdtS

👏 Congratulations to @RenewEuropeCoR member @vincentchauvet on being appointed Rapporteur on 🌍 ‘Stepping up Europe’s 2030 climate ambition towards #COP26‘ opinion. pic.twitter.com/yDZcEbG8p4